TO OUR VALUED SHAREHOLDERS

The Company has just completed a successful field season in which it drilled the Del Norte project and optioned the Lord Nelson tenures. The Del Norte property consists of

5,830.16 ha in 13 separate claims and the Lord Nelson has 2630 ha in 6 separate claims. The properties are contiguous and are located 34 km east of Stewart BC in the area known as the “Golden Triangle”. They extend from 1 to 10 kilometers south of the paved highway 37A and are 8 km west of an extensive network of logging roads. If necessary, future access can be from extensions using logging roads along the different valley bottoms.

The Company was successful in raising over 2.3 million dollars in order to fund the 2020 field season. Also, Eric Sprott became a large shareholder of Decade through the purchase of stock in two different financings. The Company is very excited by the new mineral discoveries and potential of the properties to host mineral resources.

The start of exploration was hampered by a late season melt, delays in obtaining work permits and delay in the arrival of a contract helicopter. Exploration work was conducted from Stewart in order to avoid a camp situation that may lead to health concerns due to the Covid -19 virus. All supplies were accessed from a staging area 50 km east of Stewart just off highway 37 A. A pad building crew, diamond drill crew and support staff mobilized on a daily basis from this staging area near the project. The geological crew was one that the Company has relied on for a number of years and which has intimate knowledge of the property. The geological crew was also responsible for locating many of the known mineral showings.

All core was slung out from the area of drilling to this staging site, transported to the core logging yard in Stewart where it was logged and cut. All cut core samples were transported to Actlabs in Kamloops BC for analysis via Company personnel and /or Company contractors. At present the Company has over 1300 core assay samples and 300 rock, chip and saw cut samples awaiting analysis. In addition, it is expected that another 700 core assay samples will be generated from core cutting activities that are ongoing.

A brief discussion of each project will be included along with maps and photos.

The Company had an opportunity to farm into a highly regarded but underexplored gold-silver property in the Stewart area. The Company executed a farm-in agreement on this property in December 2019 and applied for drill permits in January 2020.

Del Norte is a large property cut by three gold-bearing streams and featuring multiple styles of mineralization: vein, breccia, massive sulfide and porphyry. Each area in the Stewart area that has placer gold also has a mine/deposit associated with it. At Pretivm/Seabridge you have placer gold in Mitchell and Sulphurets Creek (placer mining ongoing) that drains those properties; at the Premier and Big Missouri gold mines, you can find placer gold below them in the Salmon River; at the Red Mountain gold deposit, you can find placer gold below it in Bitter Creek. All three streams cutting across the Del Norte property contain placer gold: Nelson Creek, Porter/Del Norte Creek and Willoughby Creek. Nelson Creek was reportedly quite rich in placer, and placer mining was conducted by Cominco in the 1930’s, with a fair amount of coarse gold reported. To date, the source of that gold has never been discovered.

Large areas of the Del Norte property have been weakly explored due to extensive ice and snow coverage. However, the rapidly receding ice has enabled better access to these areas which may host more mineralized zones in addition to those already identified. The attached map shows the various mineralized zones on the property. Drilling has taken place on the property in the period 1990 to 2019, with drilling mostly on the LG vein. Drilling for porphyry copper-gold has taken place in Del Norte Creek in the Hardpan mineral showings. Drilling for VMS deposits has taken place just to the east of the LG and LG Extension veins, now labelled the Argo zone.

The Del Norte property lies along the contact of volcanic rocks to the west and sediments to the east. The contact appears as a structural break and through thrust faulting appears to have repeat sections. Based on 2020 core logging, it appears that most of the gold-silver bearing zones are located within a black mud lapilli tuff unit that is analogous with that hosting the Eskay Creek mine. Mineralization is hosted in quartz veins, sheared graphitic tuff and breccias as well as coarse crystalline base metals in these shear zones. Shearing with associated mineralization has been identified over a strike length of 4 km along the volcanic/sediment contact. To date exploration concentrated on the LG vein, a high-grade gold-silver quartz vein traced for 1.2 km

In addition to the above mentioned mineralized structural break, the property hosts demonstrated porphyry copper-gold mineralization at depth in the Del Norte valley and potential VMS mineralization.

Map showing locations of the various mineral showing on the property. 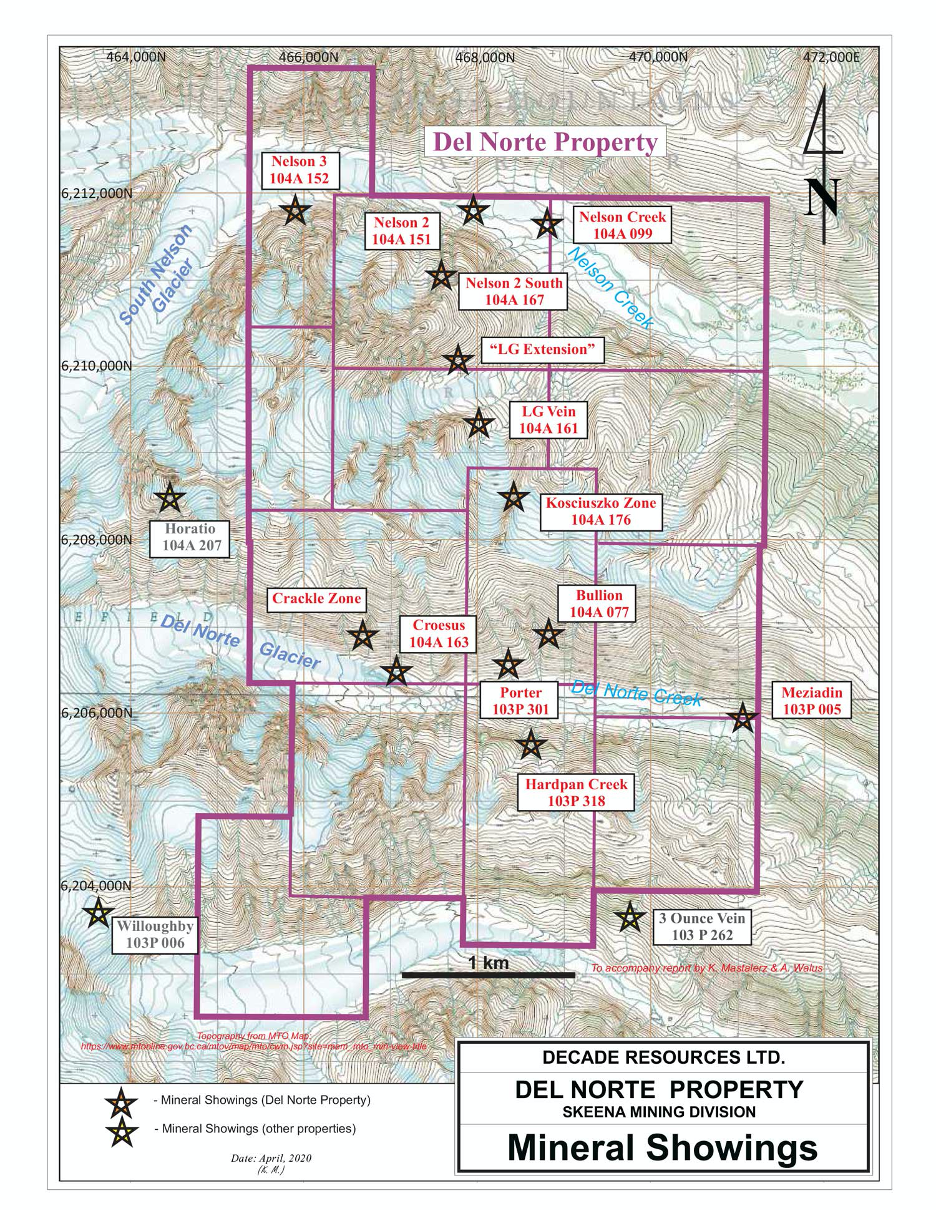 In 2018 a ZTEM airborne survey flown over the claims resulted in the delineation of 5 gold targets (potential for mesothermal gold mineralization) and 1 porphyry target. One of the gold targets coincides with the LG vein which was drilled between 2003 and 2006 and the K zone which was drilled in 2002. The ZTEM survey indicates the favourable horizon for finding gold mineralization extends the length of the property and is much more extensive than indicated by either the LG vein or K zone occurrences. It also suggests that the hydrothermal activity to which both of these structures is related goes deep, to at least 1,000m.

Exploration in the area of the former LG vein indicated or discovered the following:

A photo showing the location of the various veins is shown below: 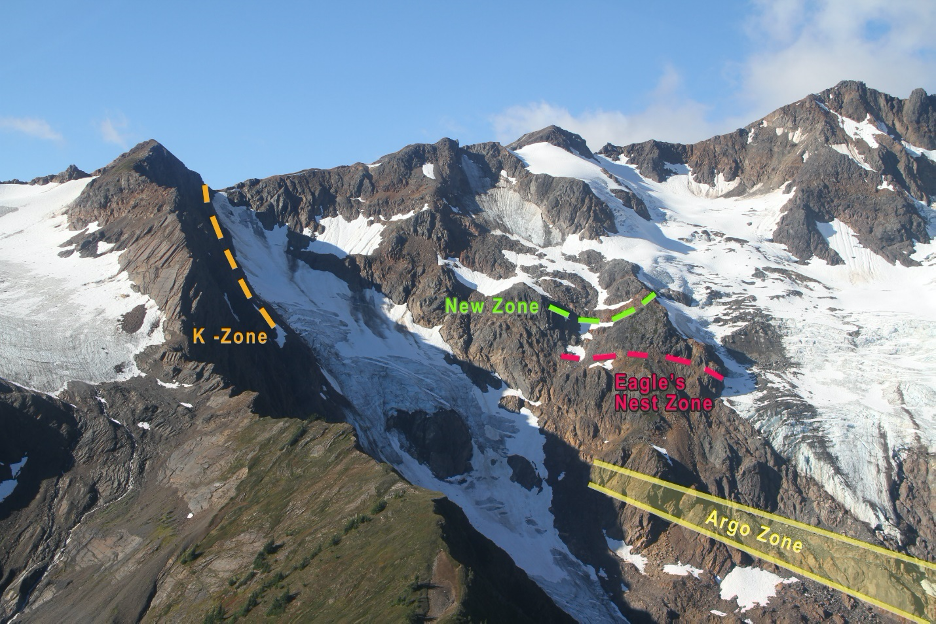 The following map shows the area of drilling on the Argo and Eagle’s Nest zone as well as area of high gold on the Del Norte/ Nelson properties. 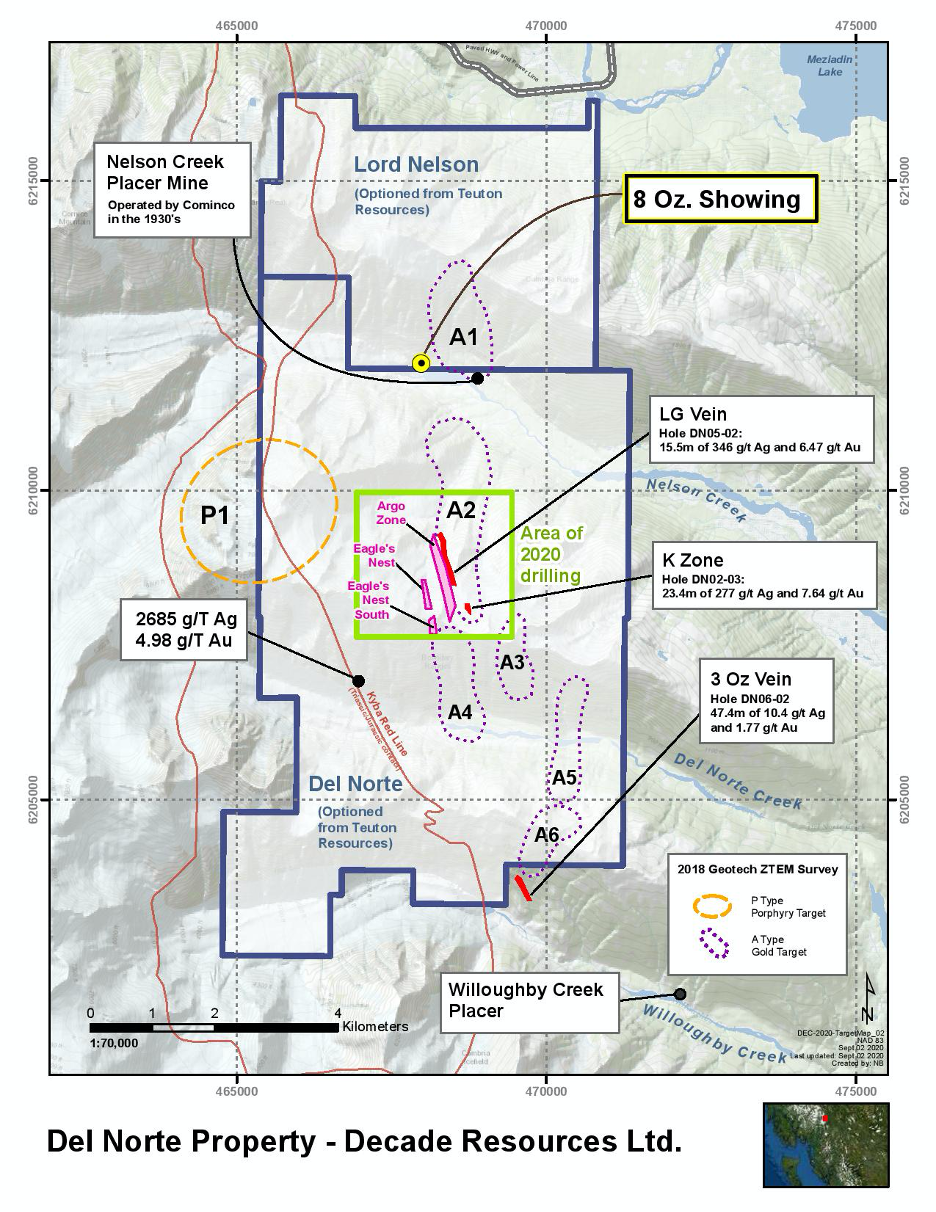 The “8” oz zone has been renamed the “14” oz zone and drilling occurred on this zone late in the season.

High lights of the 2020 Del Norte drilling include: 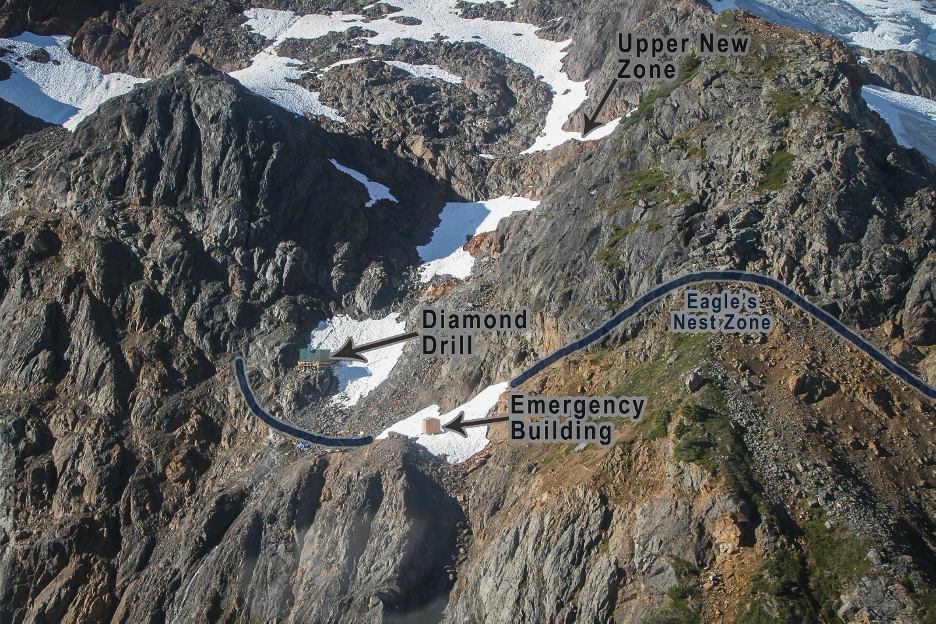 The above photo shows the location of the Eagle’s Nest drilling showing it in relation to the upper New zone. Rugged topography allowed for only 1 pad. The Company plans a program of sampling using climbers to outline the zone going south. It has been traced over 400 m of strike length to date and is obscured by ice both south and north of the occurrence.

Based on 2020 data and re-interpretation of past drill results, the Company felt that previous work had not tested the full width of the Argo zone. The previous drill results from some of the past drilling that extended to depth on the Argo zone (high lighted in yellow) is shown below:

The above assays are historical and have not been confirmed by the Company and are used for reference purposes. The Company believes that the results are an indication of the mineralization present in the property area.

Based on the 2020 exploration drilling, it appears that the Argo zone is a minimum of 450 m long with indicated true widths in excess of 15 m and an indicated depth extent greater than 300m. The zone is open along strike and depth. In addition, a second, deeper mineralized zone up to 5 m wide was intersected in holes testing the area of DDH 04-20. 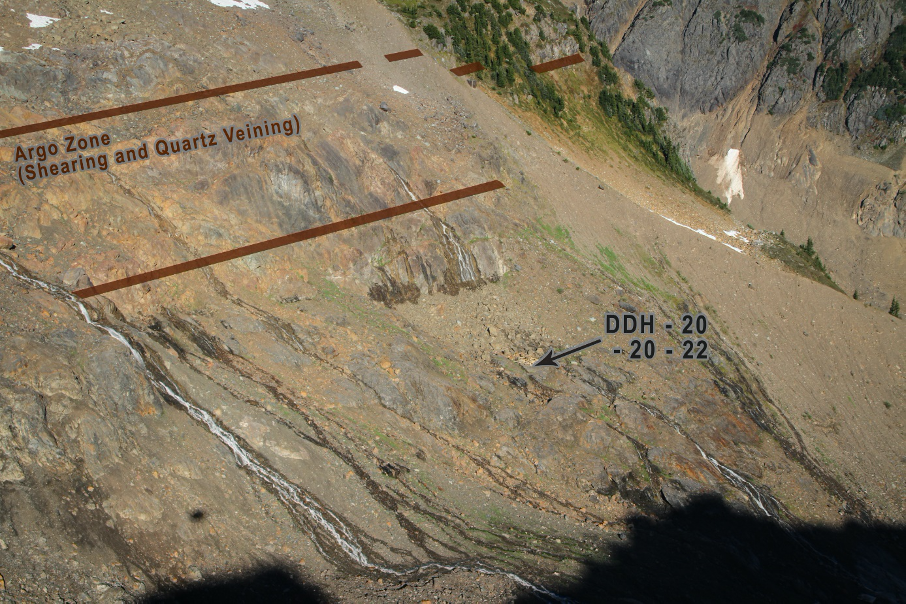 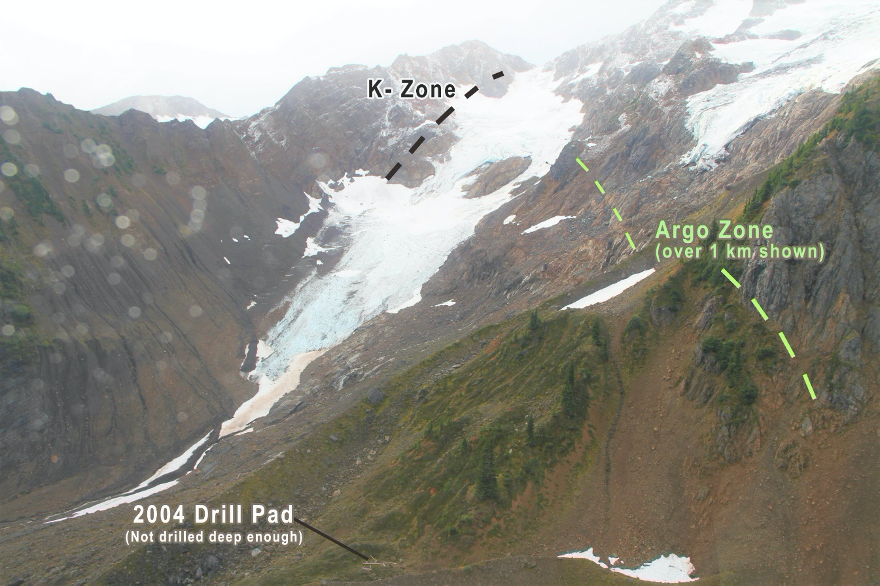 It appears that this hole was not drilled deep enough to test the full width of the Argo zone. The location of the 2004 pad is approximately 400 m north of DDH-20-20-22.

The following 3 photos show core from DDH-20-18, drilled from the most southerly pad along the Argo zone. Sphalerite and galena mineralization are hosted in quartz veins, with ground sulphides in sheared graphitic tuff and breccias as well as massive fine-grained pyrite veins in this drill hole. Width of this zone appears to be 10-15 m and it is deeper than any previous drilling terminating at 234 m in this particular drill hole. The next photo shows a smeared silver sulphosalts associated with pyrite within a quartz vein. The last photo shows coarse sphalerite and galena within the quartz vein. 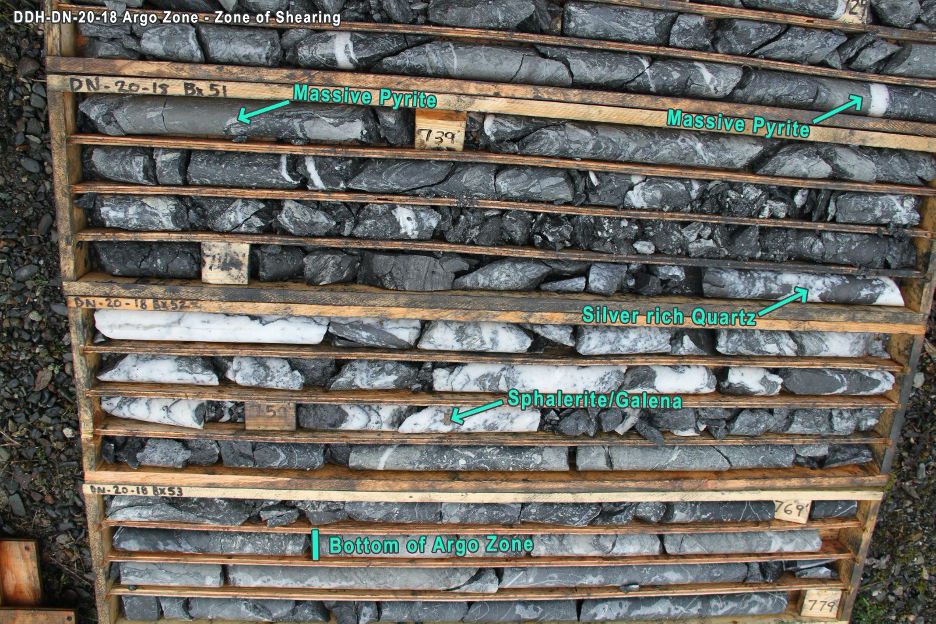 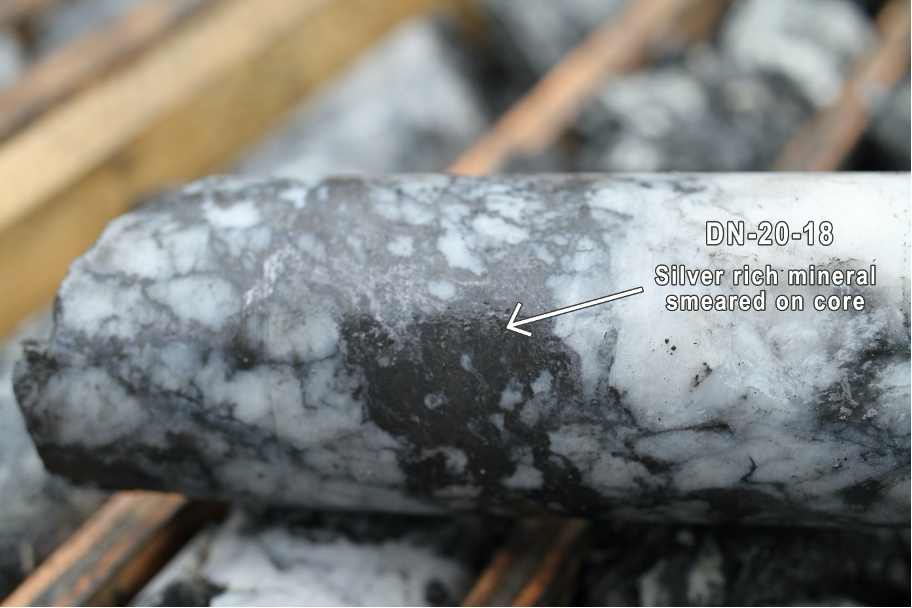 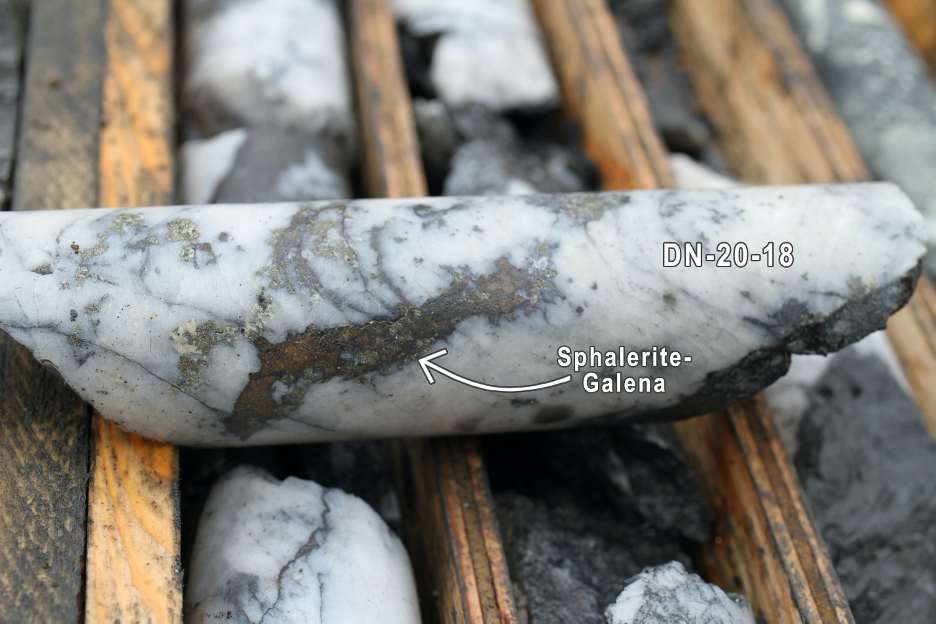 Highlights of work to date on the Lord Nelson property include: 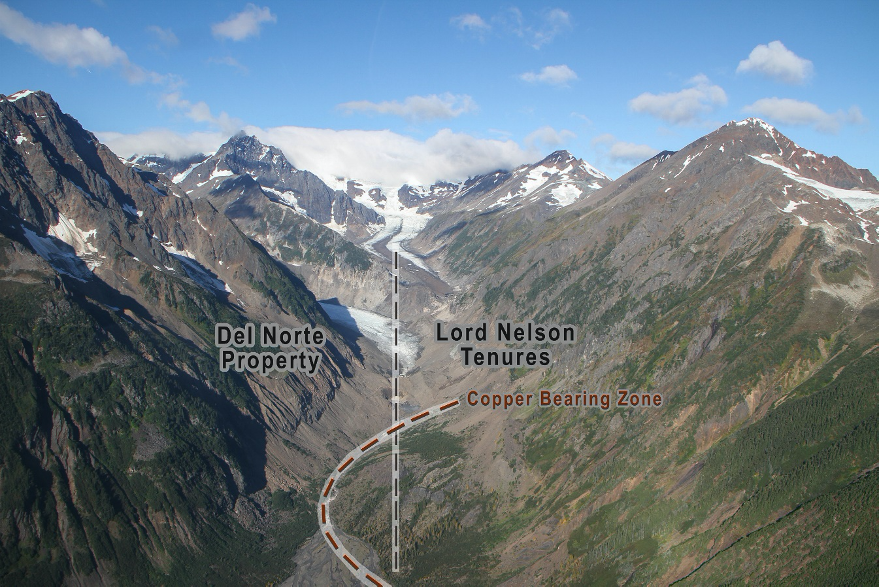 Attached is a photo of VG from the saw cutting on the “14 oz” zone and from an intersection in DDH-20-23, the first hole into this promising area. 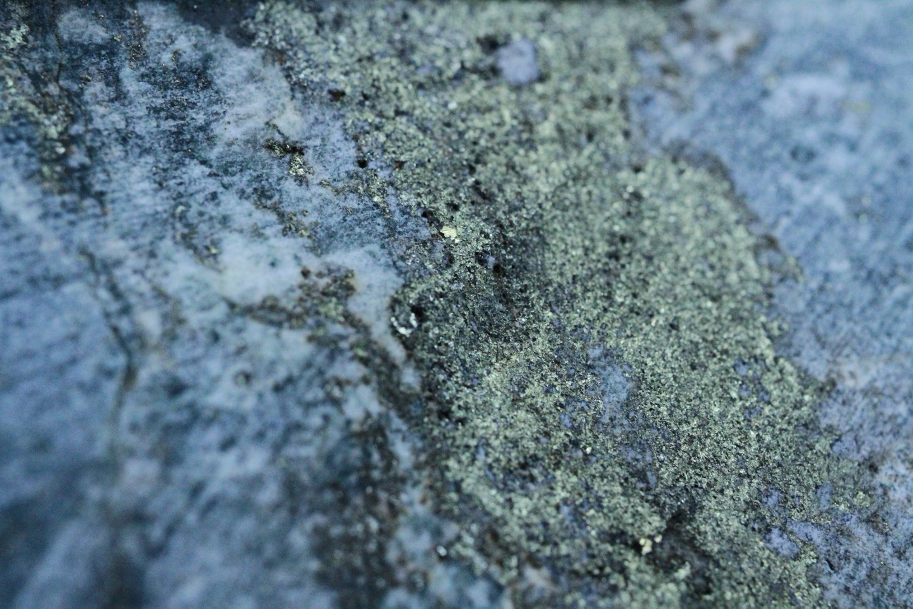 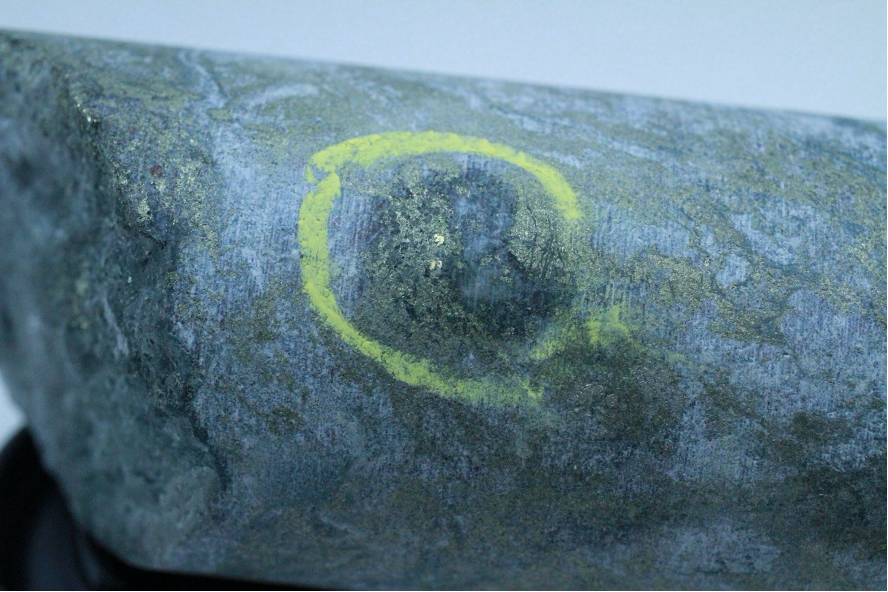 The following table shows the results for sampling on this newly outlined zone:

The zone above is only one of a number of sub parallel chalcopyrite bearing zones trending NW. Zones are open to the north and south as well as depth. The zone tested appears to occurs in strongly sericite and chloritic altered rock. Magnetite occurs with the chalcopyrite and may be a useful tool in further defining the mineralization. A photo showing area of drilling on the del Norte/Lord Nelson boundary is attached below. 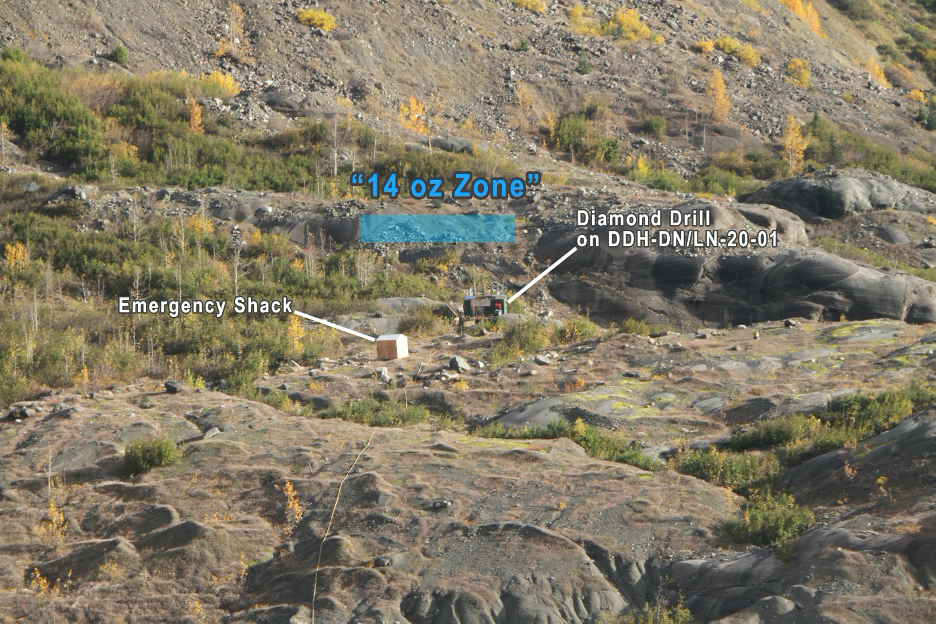