The Terrace Properties are composed of three main claim blocks; namely Terrace Gold-Dardanelle-Treasure Mountain group of claims located about 10 to 35 air kilometers east of Terrace, B.C., on the side of the Zymoetz (Copper) River valley . The property consists of 48 contiguous mineral claims owned by Decade Resources Ltd. of Stewart, B.C. Within the boundaries of the property occur numerous mineral showings listed on the BC MINFILE. The Terrace Gold also includes one additional mineral claim – 505585 – which is under option to Decade.

The Terrace area properties include 4 separate claim holdings that have a variety of different types of mineralization. Included in the different types are the following:

The Terrace Gold property is underlain by predominant intrusive rocks which belong to the Coast Plutonic Complex and/or Kleanza Plutonic Suite. The granodiorite-diorite intrusive rocks are generally bound to the east by the andesite volcanogenic rocks of the Triassic/Jurassic Telkwa/Hazelton Group. Few irregular slivers of the roof pendant of the intrusion complex consist of older Paleozoic sedimentary and volcanogenic rocks.

On the Gem property, located within the larger Terrace Gold property, the main showing is reported as a quartz-pyrite vein with minor chalcopyrite. Reports indicate that the vein ranges from 15 to 50 centimetres in width, and is exposed intermittently along the strike length for 300 metres and about 120 metres downdip. Two adits explore the mineralization with reports of 108.27 g/t Au and 195.93 g/t Ag over 0.23 m near the face and 104.74 g/t Au and 180 g/t Ag over 0.4m at the face of the northern portion of the lower adit. It appears that the zone is becoming wider as the zone is traced north. Historic surface grab sampling several hundred meters north of the adits returned over 154 g/t Au.

The above results on the Gem prospect have not been confirmed by Company assaying and are used for reference purposes only.

On the Dardanelle claim  area, a 5.5 to 7.3 metre wide quartz-albite dyke trending 075 degrees and dipping 75 degrees north occurs in granodiorite of the Cretaceous to Tertiary Coast Plutonic Complex. Quartz veins, 0.3 to 2 metres wide, occur intermittently along both contacts of the dyke for 700 metres and a vertical depth of 180 metres. Minerals observed in the quartz veins include pyrite, sphalerite, chalcopyrite, argentite, galena, arsenopyrite, bornite, covellite and gold.

The above results on the Dardanelle prospect have not been confirmed by Company assaying and are used for reference purposes only.

The Treasure Mountain claims have a great potential to host copper-silver and /or copper-gold deposits. It features numerous copper showings as well as newly located copper-gold showings of which only part have been examined recently.

Exploration on the Treasure Mountain property is limited by two major factors. The property is covered by lush vegetation and feature few outcrops. The outcrops are strongly leached of copper which makes copper mineralization very difficult to detect by prospecting or soil sampling. Outcrops are often so strongly leached that there is no sign of high grade copper mineralization on the surface which can only be found after removing the first 10-15 cm of barren rock. Highlights of 2017 sampling include:

Sample results from some of the tested zones are described below:

During the 2017 program three old trenches were found and resampled in the area designated as the Trail zone in a 2008 Assessment Report. Sample A17-68, a grab from one of the trenches returned 1.51% Cu and 9.98 g/t Au. The sample represent quartz-carbonate replacement of feldspar porphyritic andesite or basalt with 2-3% disseminated bornite and chalcopyrite.

The zone, partially exposed by an excavator during a previous exploration program has quartz-carbonate veins with minor pyrite and some malachite stain. Grab sampling of a vein returned 1.14% Cu, 35.8 g/t Ag and 22.7 g/t Au. 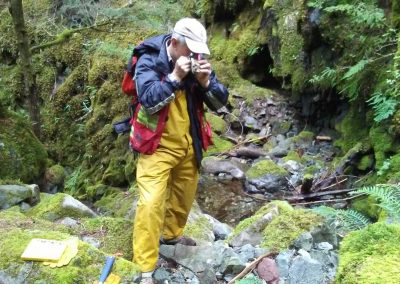 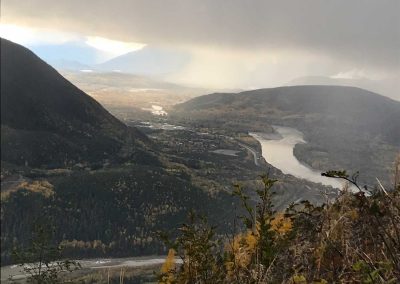 View looking west at Terrace from the No 1 adit on the Gem vein. 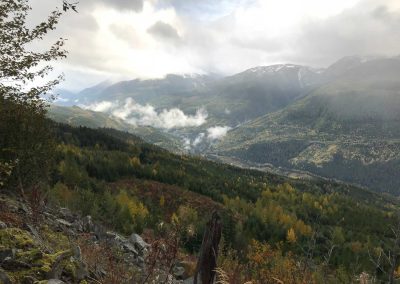 View looking east from the No 1 adit on the Gem vein. 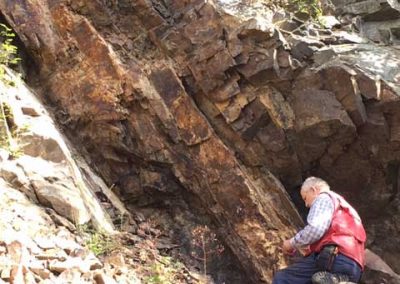 Geological crew sampling the Gem vein above the No 1 adit. 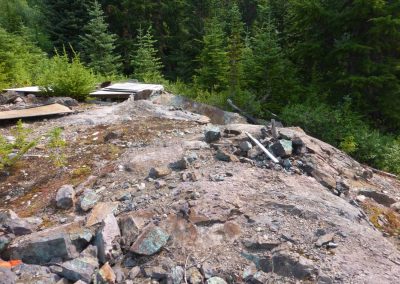 View of the Purdex zone with old construction wood. Note the abundant malachite on the broken outcrop surfaces. 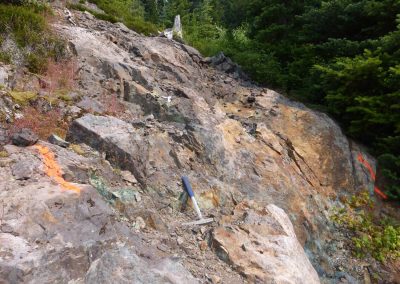 View of the Purdex zone with 2017 sample location. Note the abundant malachite on the broken outcrop surfaces. 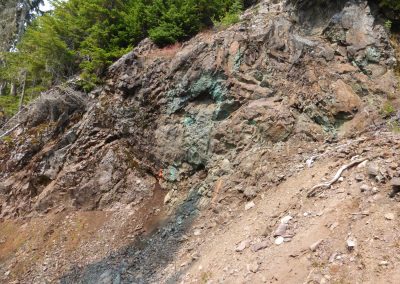 View of the Purdex zone with abundant malachite on the broken outcrop surfaces in the blasted road cut. 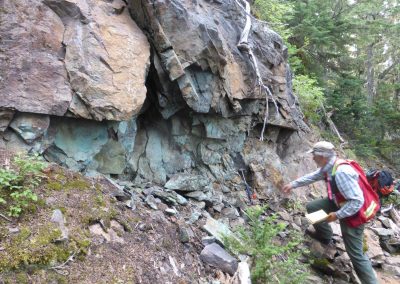 View of the Lower Purdex zone with abundant malachite on the outcrop surfaces. 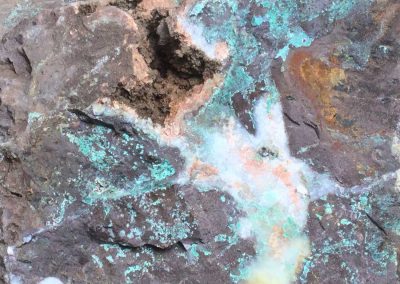 Close up of Purdex mineralization marked by abundant malachite. 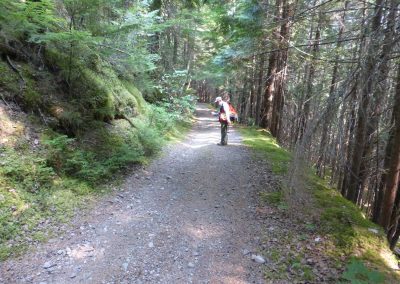 Photo of showing road to the Dardanelle vein. 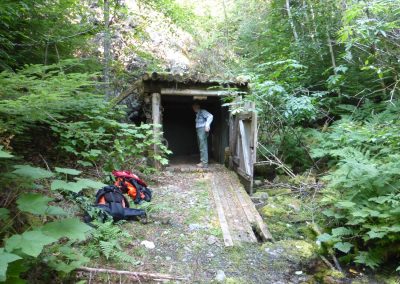 Portal to the Dardanelle vein drift. 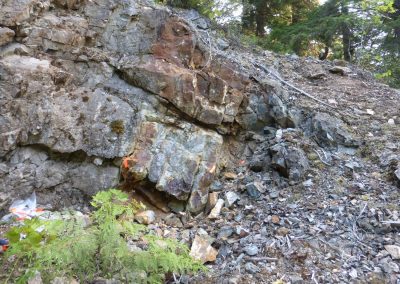 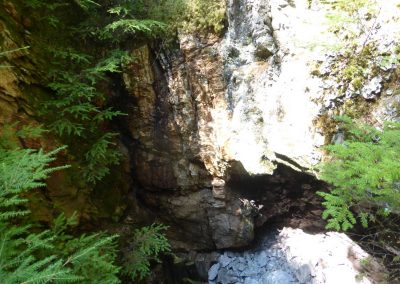 Dardanelle vein in a collapsed shaft vein is rusty and banded in nature at left of photo. 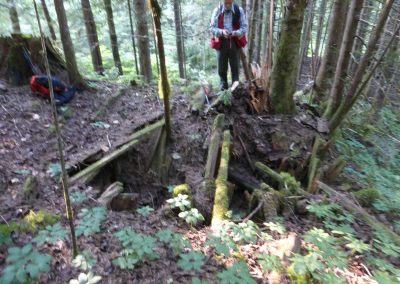 Collapsed shaft on the Dardanelle vein. 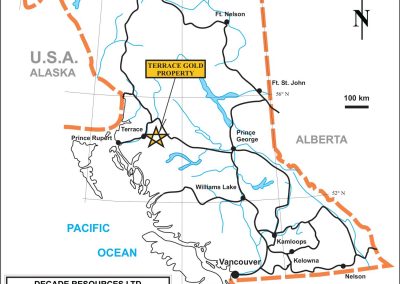 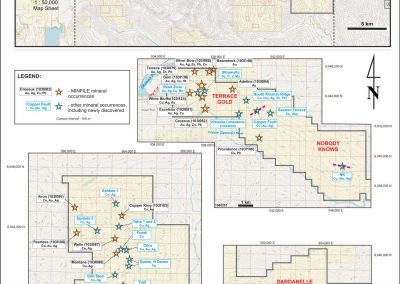 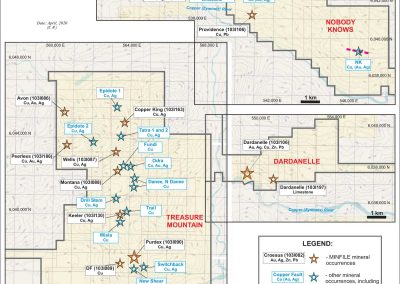