Stewart, BC – Decade Resources Ltd (“Decade” or the Company) announces that it conducted an extensive exploration program on their Terrace area properties in August to late October including 1000m of drilling prior to stopping due to winter conditions. The project stretches from 10 to 40 air kilometers east of Terrace, B.C., on the northern slopes of the Copper River valley. The project consists of 48 contiguous minerals claims totaling 17,470 hectares which form Treasure Mountain, Dardanelle (presently farmed out) and Excelsior properties. All 48 mineral claims are 100% owned by Decade Resources Ltd. The eastern part of the property (Treasure Mountain group of claims) is predominantly underlain by volcanogenic rocks of the Jurassic Telkwa/Hazelton Group. The western parts of the project (Excelsior property and the western-central part of Dardanelle property) are underlain by predominant intrusive rocks which belong to the Coast Plutonic Complex, specifically the Kleanza/Topley Plutonic Suite.

On the Treasure Mountain portion, the Company contracted Hardline Exploration Corp. based in Smithers to locate and sample historic showings reported in government reports. Descriptions of historic showings explored for include:

“Mineralization consisting of bornite, chalcocite and cuprite occurs in three shear zones cutting andesitic volcanic rocks of the Jurassic Hazelton Group. The variably oriented shear zones are up to 1.2 metres wide and contain stringers of quartz, calcite and epidote, up to 20 centimetres wide. A 1.2 metre sample from an adit assayed 9.5 per cent copper, 79 grams per tonne silver and trace gold (Minister of Mines Annual Report 1917). A sample of another shear zone assayed 4.2 per cent copper and 103 grams per tonne silver over 3 metres (Minister of Mines Annual Report 1917).” 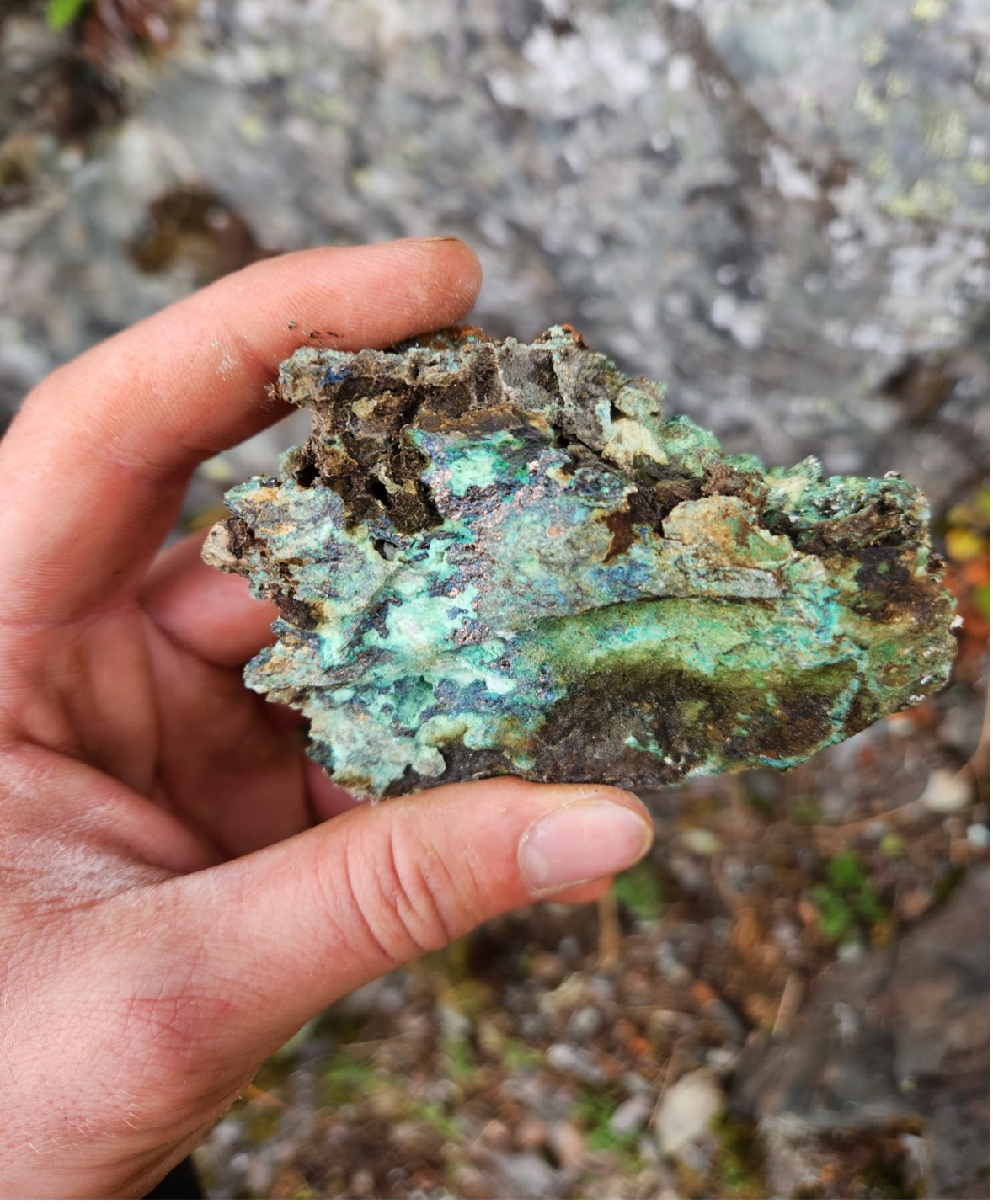 “The area is underlain by felsic to basic volcanic rocks of the Jurassic Hazelton Group. Copper minerals, likely chalcocite and bornite, occur in the volcanics. A 12 metre surface sample is reported to assay 1.35 per cent copper, 12 grams per tonne silver and 0.3 grams per tonne gold (National Mineral Inventory 103I9 Cu13). “

Assays shown above for the showings are from the BC Minfile. They are historic and have not been verified by the Company. The Company is not relying on these assays and they are used for reference purpose only.

Based on work by Hardline, the Company feels that the above historic showings have been located. They are obscured by vegetation that has grown since first discovery but a program of grab sampling was conducted on available exposures. In addition to locating the above showings, exploration indicated other copper bearing zones with potential for substantial silver and gold values.

During the program, Hardline Exploration, consultants Alex Walus and Ewa Radkiewicz-Walus and Company personnel collected over 300 samples from surface exposures. Samples were sent to MSA Labs for analysis.

In late October, the Company completed 1000m of drilling in 4 holes testing the Excelsior and Croesus showings for porphyry copper potential Three holes tested the Excelsior showing with indications of narrow zones of quartz veining with chalcopyrite. The drill hole on the Croesus was not completed due to the onset of winter conditions and the water source freezing up. The drill hole on the Croesus intersected granodiorite with chalcopyrite mineralization associated with weak potassic alteration occurring as disseminations, along fracture faces and in quartz veinlets over its 130m depth. Molybdenum mineralization was also noted on fracture faces and in fine narrow quartz veinlets. Molybdenum mineralization was strongest at the bottom of the terminated drill hole.

Ed Kruchkowski, P. Geo., a qualified person under National Instrument 43-101 is responsible for the contents of this release. E. Kruchkowski is not independent of Decade as he is the president of the Company.

Decade Resources Ltd. is a Canadian based mineral exploration company actively seeking opportunities in the resource sector. Decade holds numerous properties at various stages of development and exploration from basic grass roots to advanced ones. Its properties and projects are all located in the “Golden Triangle” area of northern British Columbia. For a complete listing of the Company assets and developments, visit the Company website at www.decaderesources.ca which is presently being updated. For investor information please call 250-636-2264 or Gary Assaly at 604-377-7969.

BY ORDER OF THE BOARD OF DIRECTORS OF DECADE RESOURCES LTD

“Neither the TSX Venture Exchange nor its Regulation Services Provider (as that term is defined in the policies of the TSX Venture Exchange) accepts responsibility for the adequacy or accuracy of this release.” “This news release may contain forward–looking statements. Forward-looking statements address future events and conditions and therefore involve inherent risks and uncertainties. Actual results may differ materially from those currently anticipated in such statements.”